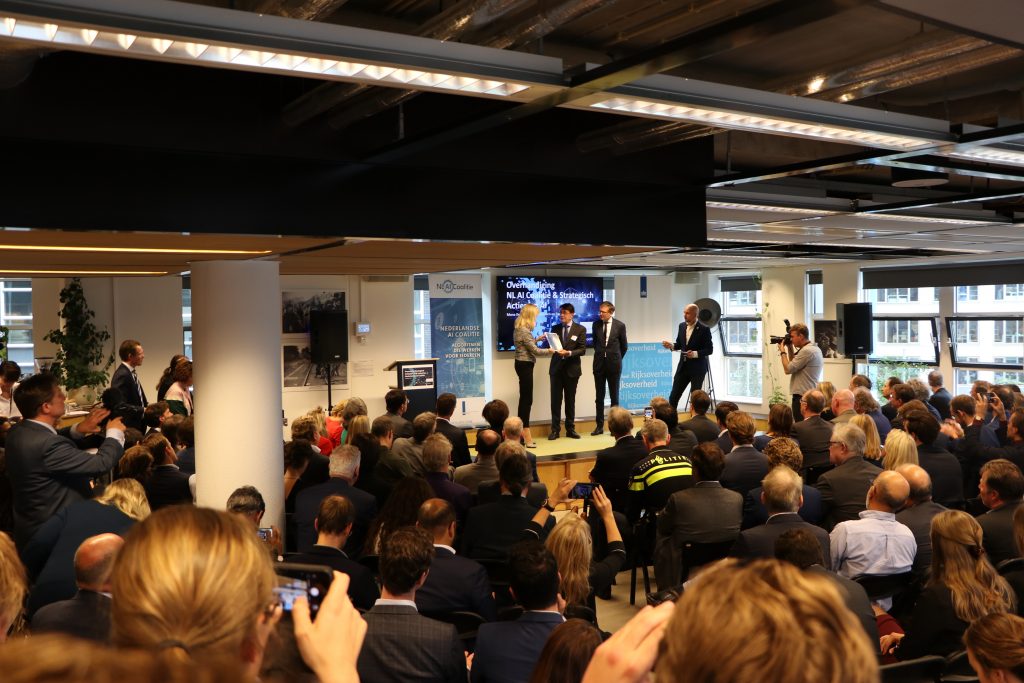 More than 65 partners from businesses, government, educational and research institutions and civil society organisations have joined the Netherlands AI Coalition that is being launched today. From Rabobank, IBM, Philips, FME, TNO, countless SMEs to the police and scientific institutions; all parties together want to ensure that the Netherlands becomes a major player in the field of artificial intelligence (AI). Only by working together we can address certain concerns, seize opportunities and Developing the Dutch AI agenda to its full potential’ says Cees Oudshoorn, director of VNO-NCW and MKB-Nederland and co-initiator of the coalition.

AI will drastically change the world as we know it. With the Netherlands AI Coalition (NL AIC) we want to ensure that this does not happen to us, but that we, as the Netherlands, keep the reins in our own hands and that every Dutch person can have confidence in it and ultimately benefit from it. This is only possible if we, as a government, together with companies, social organisations, scientists and education, put our shoulders to the wheel’, according to Focco Vijselaar, of the Ministry of Economic Affairs and Climate and co-initiator of the initiative.

Action agenda
The coalition has drawn up its own agenda, which includes numerous actions aimed at human capital, research and innovation, data sharing, social acceptance and inclusion, and start-ups and scale-ups. One of the actions is the creation of a single national AI knowledge and innovation network, which will connect all the different AI initiatives of companies and research centres. This cooperation should free up more private and public money in the coming years for some 400 extra researchers and new AI initiatives in areas where the Netherlands can distinguish itself internationally, such as in the agribusiness, healthcare, technical industry and safety.

Bringing European Top Centre to the Netherlands
In addition, a plan is being drawn up to bring a European centre of excellence for AI research to the Netherlands. This could further strengthen the Netherlands’ still relatively good starting position and act as a magnet for new talent and business activity. In addition, the coalition is working on large-scale actions, for example to make employees and employers within small and medium-sized enterprises (SMEs) aware of the opportunities offered by AI and to offer further training for digital skills.

People-focused approach gives the Netherlands a head start
The coalition shares best practices and develops widely supported standards and norms that ensure that the Netherlands is at the forefront of an entirely individual and, above all, people-oriented AI approach. According to the coalition, the Netherlands and the EU in particular can distinguish themselves with a collaborative approach in which public values, fundamental rights and the human side of AI occupy a prominent place in the new AI applications.

Many new actions in the coming period
The coalition’s action agenda is presented today at the same time as the government-wide Strategic Action Plan AI (SAPAI) (see www.rijksoverheid.nl/ezk). Both plans will reinforce each other. In the coming days and weeks, many of the coalition’s member parties will present actions that will contribute to this.