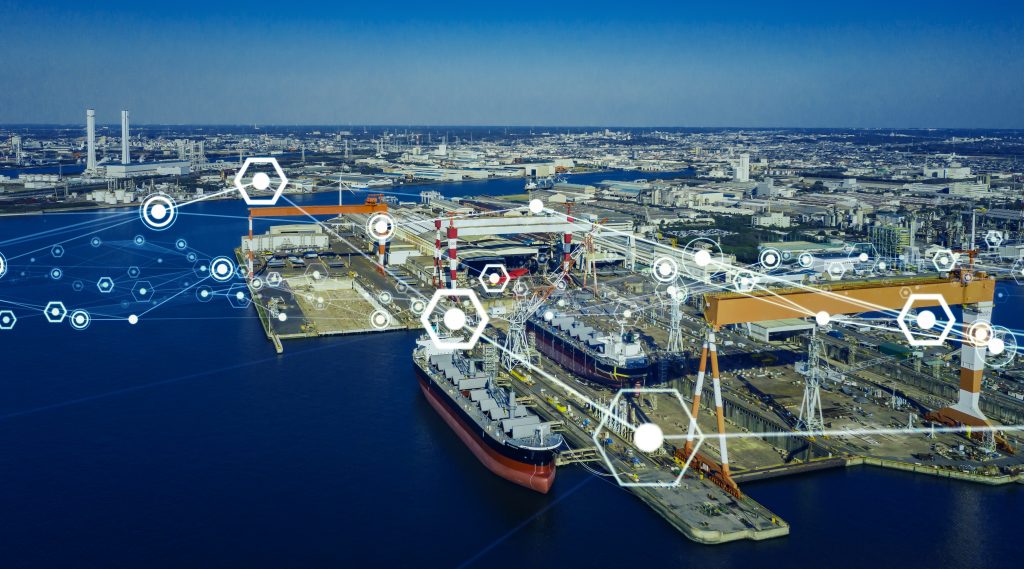 An autonomous ship. It sounds futuristic, almost impossible. Nevertheless, there are far-reaching experiments and starting applications of autonomously sailing ships.

Artificial Intelligence (AI) is needed for autonomous ships to navigate safely as in for example situational awareness and situational understanding. This means that an autonomous ship must be aware of its surroundings. To this end, sensor data from radar, lidar* and camera systems, among others, must be analysed at a high frequency. In addition, information exchanged between ships (e.g. sailing intentions) and between infrastructure and ships (e.g. water levels, lock schedules) can be very valuable.

AI is also used for coordinated dynamic route planning and optimisation. Just we use navigation tools to get from A to B, autonomous ships use such systems to efficiently follow a route to their destination. Taking into account continuously varying water and weather conditions and the behaviour of other waterway users is a major challenge.

Moreover, AI is used for maintenance and (remote) monitoring. By continuously monitoring critical systems on board, AI methods can determine the ‘health’ of the ship. If the health of the ship deteriorates, the autonomous ship will know this and will first try to repair itself, for example by adjusting the ship’s steering. The autonomous ship also has the ability to call for assistance from human maintenance operators and safely sail to where it needs to be replaced or repaired.

What challenge does it solve?

In 2030, under pressure of growing transport via water and an ageing working population, a major shortage of inland waterways skippers is expected. Autonomous navigating ships make it possible for transport via water to take place with smaller crews. Navigation is taken over by systems that analyse the ship’s environment with the help of AI and determine a safe course for the ship.

Furthermore, the sea is a dangerous place. The fewer people that need to be on board, the smaller the chance of human accidents. A ship does not become autonomous overnight. The further technology advances, the less crew a ship will need. In this way, nautical safety is increased.

Finally, the number of ship movements decreases because autonomous ships sail the most efficient routes. Thus, less energy consumption and/or downtime will occur. Not only at sea, but also on the inland waterways, autonomous inland vessels make it possible for more transport to take place on our waters and thus become an alternative to polluting transport over land.

The EU INTERREG project AVATAR is one of the concrete projects that focuses on demonstrating that it is really possible; by navigating ships autonomously on inland waterways. AVATAR mainly focuses on inland waterways in and around urban environments. Within the project, prototypes of autonomous ships are being developed and pilots tested, concepts for remote monitoring and control are set up, and revenue models are investigated. The political and legal frameworks for putting autonomous sailing into practice are also analysed.

The technology is in full development. In the Netherlands, CaptainAI has achieved good results in cooperation with Kotug International, amongst others. The knowledge institutes MARIN and TU Delft are also active in this field. SMASH! – the Dutch Smart Shipping Forum – is the driving force behind the development of autonomous ships in the Netherlands. The TU Delft’s Faculty of 3ME has the Researchlab Autonomous Shipping. Interested in participating in the working group Port and Maritime? Please do not hesitate to contact us.